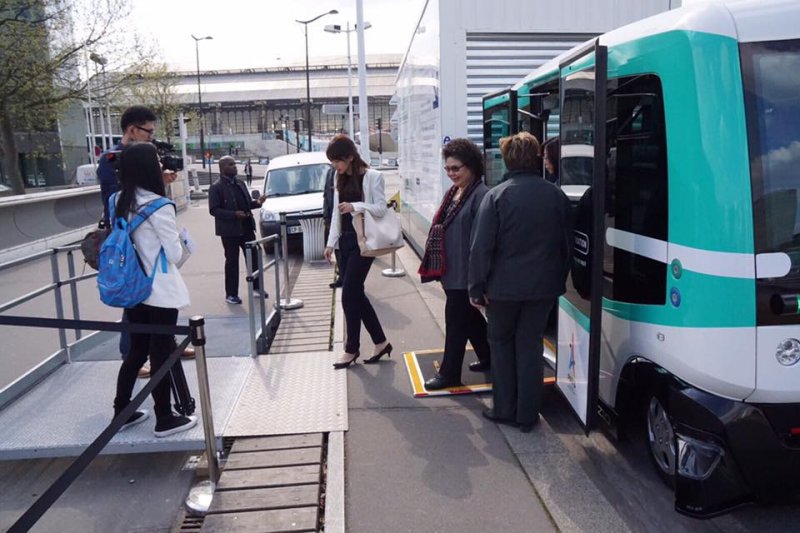 Kaohsiung will be the first laboratory for autonomous technology in an urban landscape. A Kaohsiung delegation led by Mayor Chen Chu, the Mayor of Kaohsiung, visited Paris, France to collaborate with the autonomous bus company, Easymile and the public transport provider of Paris (transports à Paris et en Ile-de-France, RATP). The three parties signed a memorandum of understanding (MoU) to import two autonomous buses to Kaohsiung in June 2017. These autonomous vehicles (AVs) will be showcased and tested in October 2017 during the EcoMobility World Festival 2017 at the Festival neighbourhood, Hamasen in Kaohsiung.

Mayor Chen Chu expressed that the reason behind the trilateral MoU is to promote and develop forward-looking urban infrastructure which is in-line with the Central Government’s policy. In achieving this, Kaohsiung is expanding the mass rapid transit (MRT) network. After this visit, the city intends to further leverage on technology to integrate existing transport infrastructure and systems.

The mayor also describes Kaohsiung as a vibrant city with diverse city cores, such as the city of Asia New Bay, Gang-shan of North Kaohsiung, and Lu Zhu Science Park. For Kaohsiung city, AVs are poised to be the next transformative technology in urban mobility. Should it be successfully imported and implemented, their use is envisioned to complement the existing public transport network by providing multimodal public transport services in hopes to attract more public to opt for public transportation.

Currently, EasyMile has developed a smart self-driving minibus EZ10 that caters 12 passengers. Since April 2015, the autonomous vehicles have driven up to 80,000 kilometers in enclosed areas or public roads in more than 50 cities and 14 countries across Asia, North America, Australia and Europe. In the future, the company plans to develop self-driving buses with 80 to 120 of carrying capacity to further relieve mobility needs.

How will AV technology disrupt the current mobility system? Will AVs be the answer for the future of urban mobility? The EcoMobility World Congress 2017 will delve deeper into this topic, while commuters and visitors can test the innovative autonomous bus at the EcoMobility World Festival 2017. Register now.

If Kaohsiung could successfully implement AVs, their use could complement the existing MRT system and other multimodal public transport network.