Successful Experience of EcoMobility in Suwon, Rep. of Korea 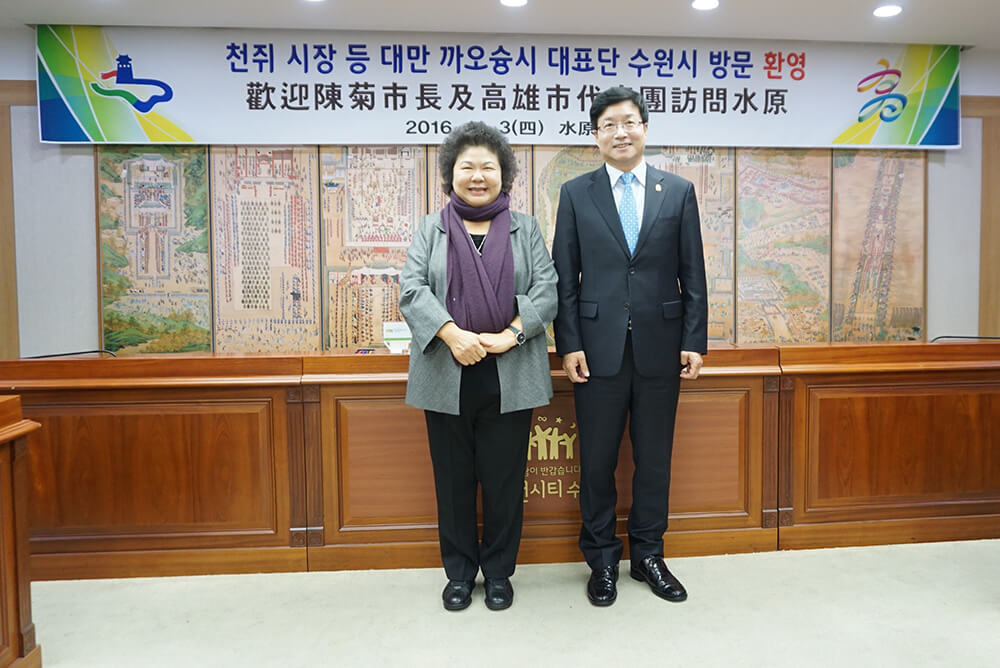 Kaohsiung’s Mayor Mayor Chen Chu was invited to give a lecture to Suwon City, Korea. The mayor was also invited to visit the local Ecomobility Festival  demonstration area to exchange views with the Mayor Yeom Tae-Young of Suwon, both sides will strengthen the city exchange program. Suwon was the first city to implement the EcoMobility World Festival in 2013.

Mayor Yeom was invited to Kaohsiung in September to participate in the “Global Harbor City Forum” and to visit Mayor Chen Chu. He invited Mayor Chen to give speech in Korea and visit the Haengungdong neighbourhood of Suwon, where the first EcoMobility World Festival happened in 2013.

Mayor Chen made a speech at the Mayor’s Hall, which illustrates the process of transforming Kaohsiung into a livable city. A full house applauded Mayor Chen’s idea and process of creating a people friendly Kaohsiung.

Mayor Chen also led the delegation to Haenghung-dong neighbourhood and exchanged views with Mayor Suwon on the experience of hosting the EcoMobility World Festival. Mayor Chen said that she is currently chairing the EcoMobility Alliance and will host the 3rd EcoMobility World Festival in Kaohsiung in October 2017, hoping to transform the living environment of the Hamasen community and declare to the world, Kaohsiung is in the pursuit of sustainable, environmentally friendly footsteps with the determination of international standards.

The mayor of Suwon City also shared the process of promoting the celebration activities. From the beginning, the residents of the demonstration area gradually turned to support and spontaneously devote themselves to more life-changing activities. The city’s ecomobility transformation activities were even expanded to the whole city, the whole outcome is unexpected. He also pointed out that through the community transformation program, the demonstration area of the local land price is increased by 50%. In addition to the successful conversion of ecomobility Suwon City, has demonstrated a strong leadership attracting city leaders all over the world to Suwon.

The two sides will strengthen cooperation between the two cities, in addition to assessing the arrangements for the two cities in the ecological communication model of teachers and students to communicate with each other, through mutual visits to learn about both living and educational environment, and through the festival.

Mayor Chen invited Suwon to visit Kaohsiung again in the next year and participate in the global celebration of the EcoMobility World Festival in 2017.