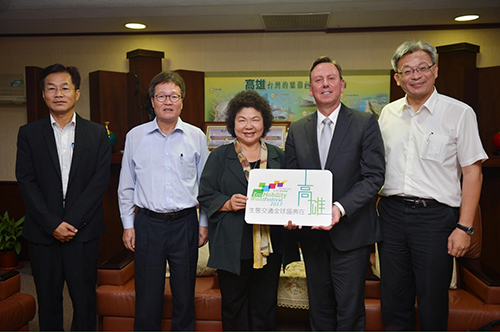 As the EcoMobility World Festival 2015 continues in Johannesburg, South Africa, the host of the 2017 event has been announced as Kaohsiung. The announcement was made at the 2015 International EcoMobility Forum, which took place in Kaohsiung on 24-25 September 2015.

The Forum, which was hosted by the ICLEI Kaohsiung Capacity Center and which also featured a Green Transportation Exhibition, took place in Kaohsiung’s Main Public Library. It brought together local governments from Germany, Japan and Korea; representatives of EcoMobility Alliance cities; and representatives of industry and academia.

An ICLEI Member since 2006, Kaohsiung has also taken over as Chair of the EcoMobility Alliance, which was founded in 2011. The EcoMobility Alliance aims at engaging public and private actors from different sectors and segments from all over the world, as well as promoting and advocating for EcoMobility at a global level, in both industrialized and developing countries.

Kaohsiung’s hosting of the EcoMobility World Festival 2017 will benefit both the city and the country. Kaohsiung has already implemented a number of measures to reduce car dependency, including the development of a rental bike system with 159 stations so far, and 750 kilometers of cycle paths. In addition, the city already has multiple public transport systems, including MRT, high speed rail, the Taiwan Railway, city buses, ferries, solar boats, and light rail (the first of its kind without catenary cables in Asia).

For the festival, a car-free zone will be created to demonstrate to citizens and visitors how car dependency can be relieved. A travel center will be constructed to manage the flow, and double shuttle bus services will be provided. In collaboration with residents, a variety of car-free day activities will be conducted.