An EcoMobility World Festival is a living lab to show how cities can take a bold step to create a forward-thinking urban transportation culture through ecomobility. The Festival is a mise-en-scène of the future of urban mobility in a real city, with real people, in real time.

Together with ICLEI, Kaohsiung hosted the third EcoMobility World Festival 2017. While the broad concept remains large similar in all three Festivals, the Festival in Kaohsiung displayed a very distinctive characteristic as the city was presented with different challenges and possibilities in comparison to its predecessors in Suwon, South Korea and Johannesburg, South Africa. 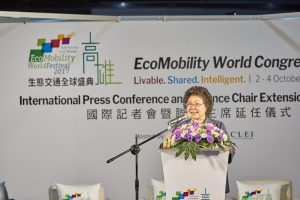 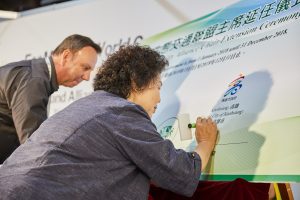 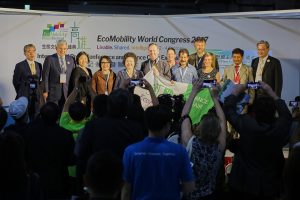 What is the EcoMobility Alliance?

The Eco­Mo­bil­ity Alliance has defined itself as a “global” actor because of both the ori­gin and nature of its mem­bers and its geo­graph­i­cal scope. It aims at engag­ing cities, pub­lic and pri­vate actors from dif­fer­ent sec­tors and seg­ments from all over the world, as well as pro­mot­ing and advo­cat­ing for Eco­Mo­bil­ity at a global level, both in indus­tri­al­ized and devel­op­ing countries.

The Eco­Mo­bil­ity Alliance was cre­ated in Octo­ber 2011 in Chang­won, Korea. It is a trans­for­ma­tion of the former Global Alliance for EcoMobility, which is a non-governmental orga­ni­za­tion founded and launched in Bali on 10 Decem­ber 2007, on the occa­sion of the 2007 United Nations Cli­mate Change Con­fer­ence (UNFCCC-COP-13).

ICLEI – Local Governments for Sustainability is the leading global network of more than 1,500 cities, towns and regions committed to building a sustainable future.

By helping the ICLEI Network to become sustainable, low-carbon, resilient, ecomobile, biodiverse, resource-efficient and productive, healthy and happy, with a green economy and smart infrastructure, we impact over 25% of the global urban population.

Who is the EcoMobility Alliance Chair?

The EcoMobility Alliance is currently chaired by Kaohsiung. As Alliance Chair, the city supports the exchange of expertise among ambitious entities in the field of EcoMobility.

Kaohsiung has already implemented a number of measures to reduce car dependency, including the development of a bike rental system with 159 stations so far, and 750 kilometres of cycle paths. In addition, the city already has multiple public transport systems, including MRT, high speed rail, the Taiwan Railway, city buses, ferries, solar boats, and light rail (the first of its kind without catenary cables in Asia).